My favorite day of the week has become Tuesday for one reason! #TRexTuesday! I love when people find ways to use their passions to do something good in their community and this next interview has done that and oh, so much more! Not only has T-Rex Tuesday inspired people to get out have fun they even attempted to set a Guinness World Record. Spoiler, they didn’t get enough people for their first attempt but I wish them the best in their next attempt! If I didn’t live so far away I would love to participate! One reason that I love CAUSEPlay, and one reason I asked to interview T-Rex Tuesdays, is seeing the joy that a costume can bring to people. And T-Rex Tuesday being me so much joy!  I know how much joy they bring others on my personal Facebook page when I post their funny videos! I even have a T-Rex Tuesday BFF now!!!! Thank you T-Rex Tuesdays for putting a smile on my face each week! I can’t wait to see what shinangians you come up with!!! –Mala 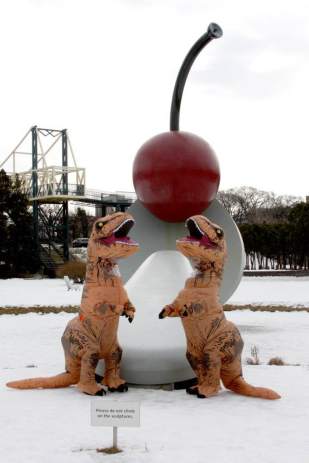 Are these your first costumes outside of Halloween? If not, what
cosplays/costumes do you have? If yes, do you see yourselves getting
more into costumes/cosplay?
The humans behind TrexTuesdays are two young professionals who live and work in the Twin Cities. We have always been passionate about costumes and shenanigans. We love any reason (an event or one we make up ourselves) to put on a costume and run around! Our current primary costume is the T-rex, and we will continue to be T-rex for as long as it remains fun.

What drew you to the T-rex costume? What’s your favorite thing about it?
It’s the most accurate dinosaur costume we’ve found and the awkward body movements are an added bonus. We love how the butt bounces when we do our dino trot!

What inspired you to make videos and where do you yourselves going with this?
When we first put the costume on and saw how it moved, we started filming random actions. But then creativity took over, and the rest is history!

How many have you made at the time of this interview?
We currently have posted 34 videos, and have many more ideas in the works.

What made you want to break the Guinness record for most t-rex
costumes in one place? And did you break the record? If not, will you
try again?
No one has ever had a gathering of dinosaurs before, so we wanted to set the record. We didn’t set an official Guinness record this year because we didn’t quite meet their required number, but we plan to make this event an annual occurrence.

What your favorite thing about this event?
We loved the how the mutual love of dinosaurs was able to bring such a wide variety of people together! We had people come from as far away as California, Texas, and Canada!

How did the idea for people to buy dinosaurs to represent them at your
event and donating them to children come about?
One of our fans on Facebook suggested it to us as a way for those unable to attend the event to be there in spirit.

What organization(s) are they being donated to? And how many will be donated?
We had 120 “MIA” fans participate and the dino figurines were donated to Children’s Hospitals and Clinics of Minnesota.

Do you see yourselves organizing an event like this again?
Yes! This was our first event, and we learned a lot! We hope to organize a similar event next year, except bigger and better! 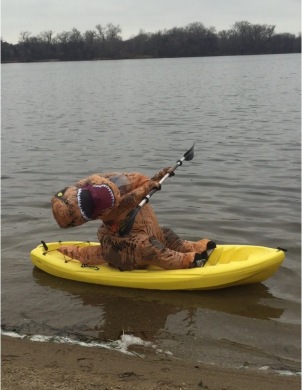 How do you feel you have influenced the cosplay community? Or even
your local community?
We have inspired people to get out and have fun, just for fun’s sake! We now have dinosaur friends all across the country (who the internet refers to as our “cousins”), who also like to make silly videos. Fans also tell us we have inspired them to go out and have fun without worrying what everyone else thinks.

What is your day job (a.k.a. how I pay for my expensive hobby)?
One of the humans works in finance, the other for the city. We also fund production costs by selling awesome TrexTuesdays T-shirts in our store! www.teespring.com/stores/trextuesdays

If you could have any job what would it be and why?
If the humans could quit their day jobs and just make T-rex videos for a living, that would be it!

Tell us something random about yourself: Coincidentally, neither human has very good upper body strength either.

Favorite Comic Series: The Far Side

Least favorite comic character and why? Venom, he is very creepy looking.

Affiliations (clubs or groups): We currently just have our own, the T-rex Squad